Covid-19 and the ‘Ndrangheta: a frail symbiotic relationship 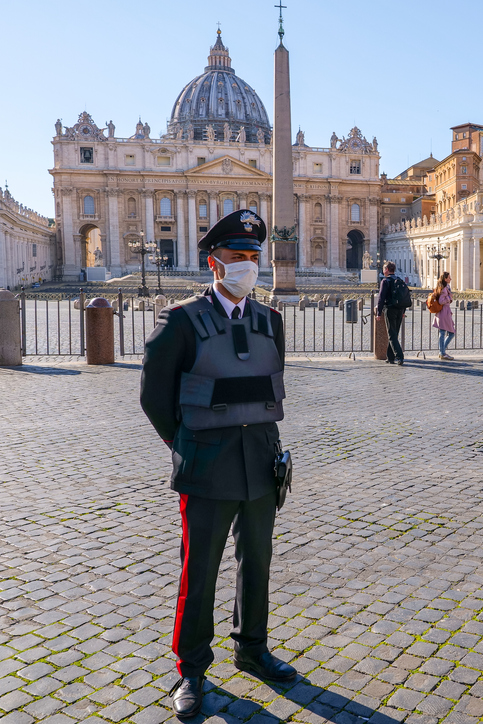 Over the past month, it has become popular opinion that organised crime groups (OCGs) across Europe may benefit from the coronavirus pandemic. In particular, Covid-19 has been heralded as an opportunity for OCGs in Italy, where the disease has prompted the Government to release 376 mafia affiliates from prison, and where mortality rates have increased 568 percent. There, Public Prosecutor Nicola Gratteri argues, people in need have turned to OCGs, who offered help first.

But is this so? After all, there are many OCGs in Italy, Covid-19 has affected the country unevenly, and the Government has sought to intervene financially. To answer this question, this article proposes a brief analysis, which focuses on one OCG, the ‘Ndrangheta, and concentrates on the impact of the pandemic in Calabria, the southernmost region of mainland Italy, its fons et origo.

A pretext for intrusion

To begin, one should consider that Covid-19 is not in itself a pretext for OCG intrusion. In fact, at a minimum, the pandemic has isolated OCG affiliates, whose mobility has been restricted. Instead, it is more appropriate to consider as “pretext” the intended responses to the Covid-19 crisis, as well as its practical consequences.

From this perspective, the first pretext for OCG intrusion in Calabria is the scarce and late provision of aid from the Government of Italy. In particular, the Italian public has been critical of Decreto Liquidità and Decreto Rilancio, which the Government issued on 8 April and 13 April 2020 to provide loan guarantees, tax relief, and liquidity to those who have endured Covid-19-related financial disruption. To most, these decrees are inadequate to sustain Italy’s recovery and have contributed to augmenting anti-government sentiment, on which the ‘Ndrangheta thrives.

Of equal importance is the perception that the EU has also committed scarce and late aid to counter Covid-19. This has also contributed to increasing anti-government sentiment in Italy, in particular as the current coalition Government is complacent with the EU. The resultant loss of consensus has created, or reinforced – depending on one’s point of view – a vacuum of power, which is in the ‘Ndrangheta’s interest to fill.

With vacuum does not necessarily come influence

Yet, this is not simple to do, and the nature of the ‘Ndrangheta prevents it from profiting fully from this vacuum. In fact, as opposed to Cosa Nostra and the Camorra, this OCG roots itself deep in familial ties, which define its membership and recruitment but entail a combination of both benefits and limitations.

As such, if on the one hand the ‘Ndrangheta is more resilient than Cosa Nostra, the Camorra, and other OCGs, due to it being a family rather than a group, on the other hand it is inherently limited. This is of particular relevance in the Covid-19 context. In fact, while non-familial OCGs may have been able to recruit among those who have lost their employment in consequence of the pandemic, the ‘Ndrangheta has not. In this sense, then, Covid-19 may have been a source of comparative disadvantage for the ‘Ndrangheta.

This is not to say that this OCG has not profited from such a vacuum. In fact, it has attempted, and on occasion succeeded, to stand in lieu of the Government during the crisis. In the Calabrian province of Crotone, for instance, the ‘Ndrangheta sought to influence the allocation of emergency shopping vouchers, which its affiliate civil servants in Strongoli and Cirò Marina (towns) attempted to distribute with priority to the families of inmates. In a similar fashion, it has exploited Covid-19 regulation to obtain the release from prison of a number of affiliates, including Vicenzino Iannazzo, a “boss” of the ‘Ndrangheta in Reggio Calabria, the administrative centre for Calabria.

What you need to know: the OCGs in Italy

Law No. 646 of 13 September 1982 defines Mafia-type association as: the intimidatory power of the bond of association, the condition of subjection, and of omertà (a policy or code of keeping silent about a crime). This is inherent to the main OCGs in Italy, which are:

That said, greater prospects for profit have come from the interception of aid, a forte of the ‘Ndrangheta. This OCG has a reputation for being successful in diverting national and EU subsidies to its shell and affiliate companies, a practice that has allowed it to expand and thrive. Commensurate with its experience, it should thus not surprise if the ‘Ndrangheta has started to embezzle aid meant for Covid-19 relief.

On the contrary, this is a prospect whose efficacy is likely to be proven soon. As aid flows in from the Government and the EU, and the easing of the lockdown continues, it is plausible that among the businesses that will make a recovery a majority will, in part or in full, be property of the ‘Ndrangheta. Conversely, among those businesses that will not recover from the crisis, a significant part will prove to be unaffiliated to the OCG. As such, the ‘Ndrangheta may not just come out unscathed from the crisis but may find that its influence has increased across the region.

With this in mind, a second consideration ought to be made. That is that the ‘Ndrangheta will not distribute aid in return for future allegiance in the Covid-19 context, or at least not to the extent that the media propose. This, too, is in consequence of the familial character of this OCG. In fact, since the ‘Ndrangheta does not recruit outside of its families, it does not need, nor intend, to provide aid to third parties in need of help in return for future favours or allegiance. Instead, this is a mechanism that other OCGs, including Cosa Nostra and the Camorra, have been observed to employ.

The market for PPE and essential goods

A second and easier avenue for the ‘Ndrangheta to benefit from the pandemic is the sale of personal protective equipment (PPE) and essential goods. These, at present, are lucrative products, as both are in high demand at a time when restrictive measures limit supply. As such, they are an attractive investment to OCGs, whose revenues have not been immune to the disruption that Covid-19 has caused.

To date, though, there is only tentative evidence that the ‘Ndrangheta has profited from this market. Of note, in this regard, is a recent comment by Assistant Prosecutor Alessandra Dolci, who claimed that an increasing number of ‘Ndrangheta affiliates are investing in businesses involved in the production of PPE, including surgical masks and respirators. Yet it remains difficult to estimate the extent to which this OCG is profiting from this market, which less organised criminals have flocked to in the hope of earning significant returns on their investments.

Even more promising for the OCG is the prospect of acquiring distressed assets in the aftermath of the pandemic. This, in the non-Covid-19 context, has already proven an effective source of revenue for the ‘Ndrangheta, whose significant capital reserves have allowed it to pursue acquisitions at times of growth and crisis. It should thus follow that the OCG is well placed to replicate its successes in the current conditions.

Of particular importance to its success will be the impact of Covid-19 on the Calabrian economy. In fact, while the region is among the poorest in Europe, it has proven resilient to the pandemic, or at least more so than its counterparts in the north of the country. As at 6 May 2020, Calabria registered a total of 1,122 confirmed Covid-19 cases, compared to 79,369 cases in Lombardia (Lombardy) and 27,939 cases in Piemonte (Piedmont). But this is not to suggest the region has not suffered, economically, from the pandemic. On the contrary, the Government of Italy has so far subjected Calabria to the same restrictive measures as all other regions in the country, which has further impoverished the territory.

It is therefore reasonable to expect imminent acquisition of assets by the ‘Ndrangheta. Of note in this regard is a recent statement from Public Prosecutor Nicola Gratteri, who said that “the ‘Ndrangheta no longer shoots, but buys everything.” According to the Dipartimento della Pubblica Sicurezza (Department of Public Safety), a branch of the Ministero dell’Interno (Ministry of the Interior), the OCG might exploit the pandemic to add to its portfolio of assets that it is used to managing, which include: hotels, restaurants, pizzerie (pizza restaurants), mining companies, metallurgical companies, car dealerships, construction companies, real estate companies, rental companies, and casinos.

The pandemic is all but a guarantee of triumph for the ‘Ndrangheta. In fact, while it would be inappropriate to neglect the opportunities that Covid-19 has presented to the OCG, it would equally be a fault to consider the organisation immune to the disease. Two examples help to illustrate this contradiction.

Firstly, with the onset and expansion of the pandemic, the OCG’s sale of narcotics has stalled, and so has its principal revenue stream. According to the Istituto Superiore di Sanità (Italian National Institute of Health), the measures that the Government has introduced to contain the spread of the pandemic have “determined a significant decrease” in the on-street dealing of narcotics. In theory, this could have increased online dealing, but no evidence has thus far proven that the ‘Ndrangheta operates online. Instead, it is more likely that the OCG has suffered from this situation, as it has been unable to deal cocaine, hashish, and heroine in the territories it permeates.

A second effect of the decrease in mobility has been a consequent decrease in the demand for prostitution. This, too, is an important revenue stream for the ‘Ndrangheta, which has been disrupted. According to the Codacons (Consumer Protection Organisation), prior to the onset of the Covid-19 crisis, illegal prostitution generated revenues of €150 million a year in Calabria. At present, this is not the case and hurts the OCG.

It is clear that the ‘Ndrangheta will not just profit from Covid-19, since even if the pandemic offers tangible opportunities, it is also a source of significant disruption. If one were to translate this situation into the context of nature, it would be similar to having two parasitic creatures attempting to live off each other. Sars-cov-2, the virus that causes Covid-19, infiltrates bodies to reproduce and spread, to the detriment of its host, and much in the same fashion the ‘Ndrangheta infiltrates society to consolidate and expand, also to the detriment of its host. Yet, a symbiotic relationship between the two is limited, as neither organism seeks to sustain the other, but instead uses its counterpart to sustain itself.

As such, it is unlikely that Covid-19 will change the modus operandi of the ‘Ndrangheta. Unless, of course, a second wave of contagion takes it by surprise.